History of the jaycees 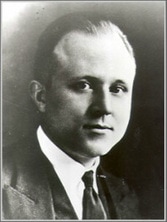 Henry Giessenbier founded the Jaycees in 1920, with 3,000 members, in St. Louis, Missouri. It was Henry’s vision to provide young people with opportunities which they had little or no access to otherwise attain. He believed that young people could change the world. He was right.

In his era, most young men were out of school and working by the age of 15. Their first jobs were most likely the jobs they held throughout their lives. With luck and hard work, some might reach executive positions by their forties. Giessenbier felt that young men were not receiving the opportunities necessary to develop their skills at a younger age, thus depriving our nation of an important resource, and so he formed the founding ideals of the U.S. Junior Chamber.

His theory was simple – to offer leadership opportunities to young people, giving them hands-on experience through serving the community. That concept has never wavered.

"From within the walls of the soul of this organization wherein the foundation of character and good citizenship are laid, I hope a message will come in the sometime of tomorrow that will stir the people towards the establishment of a permanent and everlasting world peace."
- Henry Giessenbier (1892-1935)
1920s
1920 – The United States Junior Chamber of Commerce (USJCC) was formed in St. Louis, Missouri, with 3,000 members.
1923 – Get Out The Vote was the first Jaycee program to receive national endorsement.
1925 – Beginning of national projects Know America First and Fire Prevention. Birth of EXPANSION, the first USJC national magazine.
1926 – Development of aviation adopted as national project.
1927 – Jaycee Charles A. Lindbergh made the first solo flight between New York and Paris. Jaycees worked with Lindbergh to develop the U.S. Air Mail Service.

1950s
1951 – War Memorial Headquarters in Tulsa dedicated. At urging of Andy Mungenast, the reference to “Faith in God” was added to the Jaycee Creed.
1952 – The JCI Senate was formed through the efforts of Phil Pugsley, the 1951 JCI President, at the 7th JCI World Congress in Melbourne, Australia. The granting of a Senatorship is the highest honour within JCI and awards life-long membership to an individual member.
1953 – Jaycees sponsored stops on Professional Golfers’ Association tour for first time at Greensboro, North Carolina, and Hartford, Connecticut. The first permanent World Headquarters was established at the United States Jaycees War Memorial Headquarters Building in Tulsa, Oklahoma, and Philip Van Slyck was hired as JCI's first full-time Secretary General. The first JCI European Conference was held in Paris.
1954 – First Outstanding Young Farmer and Junior Tennis programs held.
1955 – The rapidly growing World Headquarters moved to its own building in Miami Beach, Florida, USA.
1959 – Jaycees supported statehood for Alaska. Hawaii gained statehood the following year due to Jaycee efforts.

For more insight on how the Junior Chamber has affected the lives of its members, the following book is recommended: A Legacy of Leadership, by John W. Clark, USJC Historian